19 Nov Why We Love Our Pets So Much

Posted at 08:00h in Pet Behavior by Julie Meisler 0 Comments

Why we love our pets so much is not easily explained. When our pets look into our eyes, we see nothing but love reflected back at us. Our pets are like our children. We share a mutual devoted affection with them. But why? Has this relationship evolved over thousands of years or is it a relatively recent development?

Evidence exists that dogs were domesticated between 13,000 and 30,000 years ago. History indicates dogs are the most ancient animal companion to humans. Evidence uncovered in archaeological sites tells us early domestic dogs helped early humans hunt mammoths. Artwork uncovered from approximately 10,000 years ago includes drawings of dogs leading scientists to believe dogs were admired and perhaps even loved. 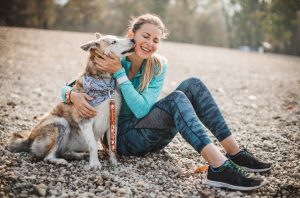 Scientists discovered an ancient cemetery in Siberia in 2016 which revealed 5,000 to 8,000 year old dogs buried next to humans. Clive Wynne the director of the Canine Science Collaboratory at Arizona State University has devoted his life to studying the evolutionary relationship between animals and people and believes this is a significant discovery. Wynne explains, “You get dog burials, which show there was a lot of care and attention paid to the burial and they include grave goods (valuable items placed in the grave for use in the afterlife), which really seems like there was a strong indication of affection.”

The evolution of dogs and wolves suggests dogs started out as wolves who scavenged. Over time humans became more comfortable around dogs as did dogs around humans. As the relationship evolved, dogs were allowed into homes and began hunting with people.

While dogs evolved to being companions of human hunter gatherers, cats evolved to being farmers’ pets. The Natufians who are responsible for inventing agriculture inhabited the Levant about 13,000 to 10,000 years ago. They are also credited with being the first to recognize the usefulness of cats in helping to eradicate grain-loving mice.

Early cats were unlike those we know today. They were more similar to today’s urban foxes which easily adapt to our human environment while still retaining a certain degree of wildness. Cats lovely soft fur and ability to demonstrate affection towards humans are attractive characteristics which may have played a role in humans eventually adopting them as pets.

For both dogs and cats, their domestication may have started with their behavior. As they became more tame they were better able to adapt to human environments. As humans became more involved with selective breeding, characteristics we find most appealing in pets including cute features, a desire to cuddle and a cooperative nature were accentuated. As a result, early dogs and cats evolved into the pets we love today.

While this helps explains the evolution of early dogs and cats from wild animals to pets, it doesn’t explain why we love our pets so much. Clive Wynne believes it is not necessarily because of their utility. Most dogs are not used for hunting partners. Many cats aren’t chasing mice out of grain. As Wynne notes, “My own dog, who I love out of all proportion, is utterly and completely useless.”

Many theories exist about why we love our pets so much. One theory is pet ownership is good for physical and mental health. Another is that social factors rather than biological ones explain our love for pets. Still another one is that a social contagion occurs when we see others with pets. Wynne allowed perhaps there isn’t a scientific reason why pets are loved with such abandon. Maybe according to Wynne, the reason is simple:  we love pets because of their childlike characteristics, as well as the fact they are unable to survive on their own. That sounds about right. Everyone loves soft and helpless things. But even better is the unconditional love we receive from our pets in return.