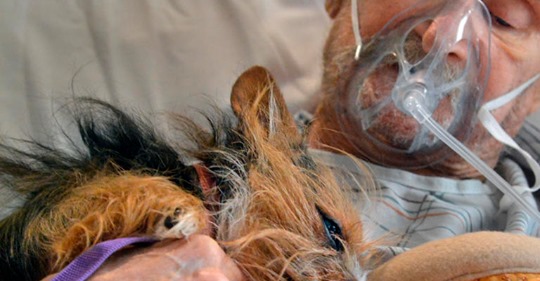 Posted at 19:20h in Dogs by Julie Meisler 0 Comments

A dying veteran’s last wish was for one final goodbye with his beloved dog, Patch. John Vincent, a former marine who fought in Vietnam, entered hospice earlier this month. Before doing so, he surrendered Patch to the local animal shelter. This decision was made because Mr. Vincent has no family living near him. When a palliative care social worker called the shelter to let them know Mr. Vincent did not have much time left and his dying wish was to see Patch one last time, efforts were made to grant it.

Last Friday a team from the shelter brought Patch to the hospice facility for a final reunion. There was not a dry eye in the room when Mr. Vincent and Patch were reunited. Patch was left to cuddle and spend the day with Mr. Vincent. Adam Ricci, chief of field operations at Albuquerque’s Animal Welfare Department, said, “We left Patch there with Mr. Vincent for the whole day so they could spend one last day together.”

Mr. Vincent explained why he chose Patch from a neighbor who had a litter of puppies. “He was the smallest, and I wanted one who could ride on my bike,” said Mr. Vincent. He went on to explain how he chose to name him. “The only hair I had was on my chin, which was called a patch. And he had a little white patch, so we were the patch brothers,” Mr. Vincent explained.

Since Mr. Vincent was a motorcycle enthusiast, he and Patch shared many adventures on his Harley-Davidson. Patch even rode with his own special pair of tiny goggles. They took long walks together every night after Mr. Vincent retired.

When Patch was placed on the hospice bed, he smothered Mr. Vincent with kisses while Mr. Vincent cooed, “Yeah, that’s me, that’s daddy. Are you so happy to see me? I’m so happy to see you.” Mr. Vincent summed up his time in the military with a smile while looking at Patch by saying, “I always went where the best went.”

Though many people across the country were moved by this story and expressed a desire to adopt Patch, a home has already been found for him. Those in the room who were fortunate to witness this heartwarming reunion assured Mr. Vincent Patch “will get a wonderful home.” The Albuquerque Journal confirmed Patch is spoken for and has a home waiting for him.